My Polygon / Matic Collection
“The Power of Love”
1 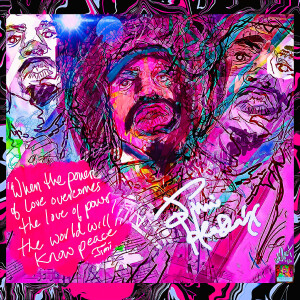 “The Power of Love”

“The Power of Love” ~2022 This 1/1 Extremely Awesome NFT features a quote from Rock & Roll Legend “Jimi Hendrix”
“When the power of love overcomes the love of power, the world will know peace”… Jimi Jimi Hendrix, byname of James Marshall Hendrix, originally John Allen Hendrix, (born November 27, 1942, Seattle, Washington, U.S.—died September 18, 1970, London, England), American rock guitarist, singer, and composer who fused American traditions of blues, jazz, rock, and soul with techniques of British avant-garde rock to redefine the electric guitar in his own image. Though his active career as a featured artist lasted a mere four years, Hendrix altered the course of popular music and became one of the most successful and influential musicians of his era. An instrumentalist who radically redefined the expressive potential and sonic palette of the electric guitar, he was the composer of a classic repertoire of songs ranging from ferocious rockers to delicate, complex ballads. He also was the most charismatic in-concert performer of his generation. Moreover, he was a visionary who collapsed the genre boundaries of rock, soul, blues, and jazz Cited~ www.Britannica.com (Jimi Hendrix) This NFT comes with a physical token (1) 24” x 24” x 2” Hand Embellished, Numbered 1/1 & Signed Artist Print on an awesome aluminum canvas. Please DM or email me with proof of purchase to receive the print. Instagram @bitfinityfineartwbjones Or email [email protected] * subject NFT purchase

W.B. Jones- B.F.A Illustration/Concept/Graphic Design I Graduated with my Bachelors of Fine Arts B.F.A in Communication Art \ Illustration Design, along with a Minor in Art History from- "The Savannah College of Art and Design" SCAD in 2008. My portfolio includes both ~Traditional and Digital Work ~

With a unique style of using mixed media material’s along with new age process’s and digital technique’s. Combining them with my traditional Illustration & Art Foundation in the Illustration, Graphic, Conceptual and Fine Art fields. Using these facets into the implementation combining to execute the needed idea’s in my Illustration and Graphic Design work.

My favorite projects include ~ Mural’s, Children’s Book Illustration, NFT Design, Spot Editorial Illustration, Fashion Textile Design, Scientific Illustration, Pop Surrealism, Character & Landscape Design, Wildlife Art, Corporate Branding & Custom Logos, and Scientific Illustration. Currently I am freelancing and accepting new clients for commissioned projects… Please Email or DM me @ [email protected] ~ Instagram [email protected] Twitter ~ WBJonesFineArt1 On FB ~ Madcow Illustration Ink’ LinkedIn~ William Brandon Jones. I currently live and work between both, South Carolina and Savannah GA. with my 2 children. Thank you for your time and please let me know if I can help you with any of your Art & Design projects you may have. Thank you, W.B.Jones